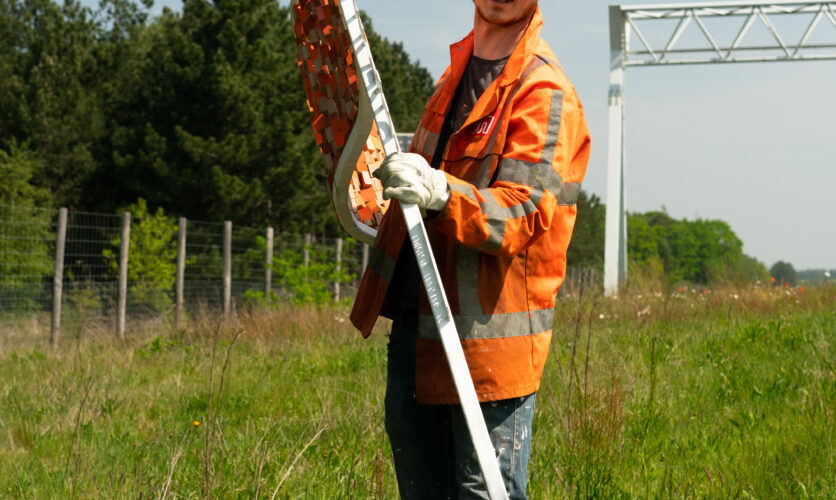 Bouke Bruins once started as a graffiti artist. Today, with his Boyscout Designer platform, he creates interactive installations and design interventions in public space. Sometimes as entertainment, sometimes to start a dialogue. Sometimes both. In this way he wants to turn the public space into a pleasant playground. To take you into the world of urban interventions, he introduces five of his favorite artists.

“Adams & Itso”, Bouke kicks off. “Two intervention artists from Northern Europe. That was the beginning of my work, when I found the tipping point between graffiti, design and the work I do now. During my graffiti period I bumped into their work. They were very busy using that public space in a different way, not so much leaving graffiti behind by spraying on a wall with a spraycan, but looking much more at how they could leave other work behind that tells more of a story. In Copenhagen Central Station, for example, they had a kind of student room for over a year. They just jumped off the track and then walked a few hundred meters into the tunnels. They captured that on a film. They are inspiring images: you can just start something somewhere without being discovered. And not out of necessity, but from an idealistic existence you will also fill and use those spaces. Sometimes the hidden things are so close. As humans, we don’t look any further. Housing prices are rising around the station. There is a housing shortage, but there is actually enough space. They take advantage of that. I find that inspiring.”

“Harmen de Hoop is the godfather of urban interventions in the Netherlands. He started thirty years ago as a young student in Amsterdam. He does this in an activist way: he started very easily by pasting graphic work on the floor in laundromats. He did that illegally but the owner liked it and asked him if he wanted to do that in another business of his, and then he got some money out of it, although he had a certain anarchist urge. As a free-spirited artist he placed that work and adapted the public space with a small twist. Sometimes it stood out, sometimes it didn’t. But there is also a certain cynicism in it. One of his works that I really like: he made the space around a lamppost is a sandbox with all kinds of children’s toys in it, while it is just next to the road. It is always a bit on the edge. It questions questions. He always reads very well in a subject, and then uses an intervention to make a statement and that makes his work so layered.”

Harmen de Hoop regularly collaborates with the Italian artist Biancoshock: “On the Instagram page @biancoshock.de_hoop they regularly give each other assignments. For example: Use a piece of cardboard to make a work. And there they both give their own interpretation. Biancoschock is a lot younger and goes more towards street art. He is less concerned with the concept and a bit more with the image, but he works with a humorous view of that public space. He plays with what he sees, for example by turning around a traffic sign and drawing something on it with a marker. This gives you a different picture and you start to see that public space as a playground. I like how visible the difference between the two becomes, even though they have the same goal It is an expressive work, it makes you laugh instantly.”

“Rocco, from Rocco und seine brüder, is a fanatic graffiti artist from Berlin. In my opinion he has become a group, he is bigger than himself. His actions are focused on social media, he brings himself out very well. He knows how to portray stories beautifully. His work is very critical, of European governments but also of capitalism. You feel tension. He mainly makes short films. Recently he made a somewhat longer one, Blaues Licht: all his life he went to all corners of the world to spray graffiti. But he goes one step further: he showed this film with his team in a metro tunnel in Berlin. They pretend they work for the metro company, they fake a few things. They rent two actors and a screenwriter prepare a play around the story he has written. That story is played in a side tunnel of the subway that is not being used. They invite people to do this. As employees ope they use the emergency exit so that visitors can enter the tunnel. There is sound, there are beamers and chairs; it is very professional. There they see the story that is taking place at that moment, so people also see themselves in the film. Definitely worth a look.”

Like many urban intervention artists, it started for Bouke with graffiti. He saw boys combine graffiti and art and that inspired him: “At the time you had a graffiti crew from Utrecht, called ASK, which stood for All Spots Killed. They were literally on the highest roofs and spraying the craziest places. I was then about fourteenth and because they were in such special places, I started to see that city very differently. Every now and then a picture appeared on the internet and then you walked through the city again while looking up. boy was that just fucking cool. That really shaped my view then. ” Both Bouke and your editor on duty have failed to trace these images, but this is how a need is made a virtue: Act as Bouke at fourteen, walk through the city and be surprised by the arts that you encounter in that public space. Sometimes there are beautiful things to see.