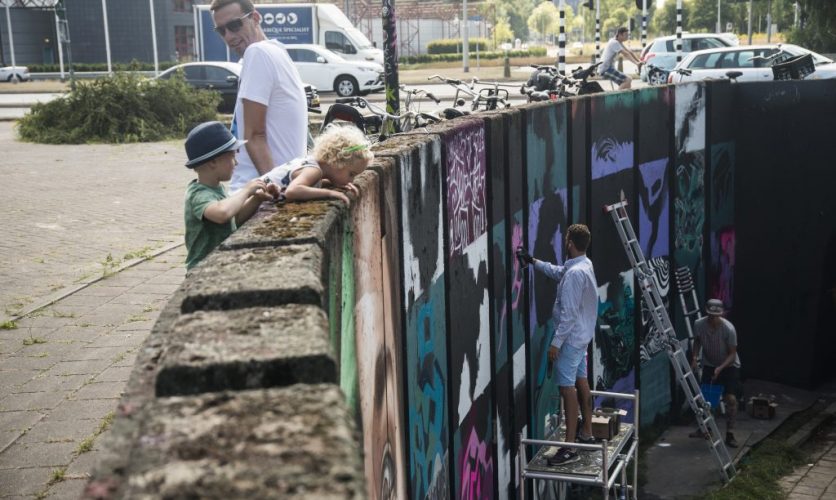 
The entire acceptance has changed

Before the tenth edition of Step In The Arena starts on 8 June, maintenance work is still being done on the concrete. The timing of this has been coordinated by the municipality with the organization of the festival, reported the Eindhovens Dagblad. That says something about the changing relationships between the city administration and the graffiti community.

More than ten years ago Dave van den Berg, initiator of the graffiti jam with this idea, applied to Dynamo. In Eindhoven, a lot happened in the field of hip hop, but he missed the graffiti element.  “Something happened, but: It was all so incrowd. Eindhoven has such a beautiful history when it comes to graffiti, but that has never been told. ”

Three months later the first edition of Step In The Arena took place: “I wanted to organize a festival where the public comes to, while preserving what an original jam is. No gates; an open space where the artist feels good and so does the visitor. Little happened in the field of graffiti, so I wanted to give it a boost. Like Caz did with Back To Planet Rock at the time. That was my example: you can just boost something. “

“A lot of noise was made and the first edition was a success,” Van den Berg looks back. “Fleks featured on the front page of the Eindhovens Dagblad and the ED logo appeared in tag letters. That impressed the scene, the lay public, the press, and stakeholders. We were right there and I thought: that will be fine in the coming years. “

A pop-up shop, an exhibition with the pioneers; many ideas became reality. As a personal highlight, Van den Berg mentions the exhibition “No-Friends”, which he organized together with Wladimir Mandshanden: they had cleaned it. This has created a gigantic database with tags from Eindhoven. Thousands of photos. A great opportunity to portray the pioneers. It has become an exhibition with sixteen pioneers, including Erosie, Caz and Space3. Photos of (mostly illegal) pieces and the story of the artist, recorded by Wladimir. ”

Together with Alderman Schreurs, the exhibition was set up in the Town Hall: “I made an installation of TVs, on which, repeatedly, the photos from the database could be seen. Because: once you start looking at street art, you see it everywhere. It does something to your head. I wanted to simulate that. “

For the public, graffiti also seems to have come forever. The added value has become permanently visible in the city: “De Berenkuil has changed from a vague place where homeless people slept in a park where you and your children will have a picnic.” Dave is therefore pleased that his ideas received the necessary attention: “The press has fallen in love with graffiti. I call that the magic of the spray can. They think it’s fat. It is colorful. We started to do more murals in the city. In 2011 we did one at the Limburglaan roundabout. We were standing there with four platforms and a scaffolding: people called the police because they thought we were working illegally. Now the people from the neighborhood are calling if we would like to come and do a wall. ”

Tags // Graffiti // Step in the Arena