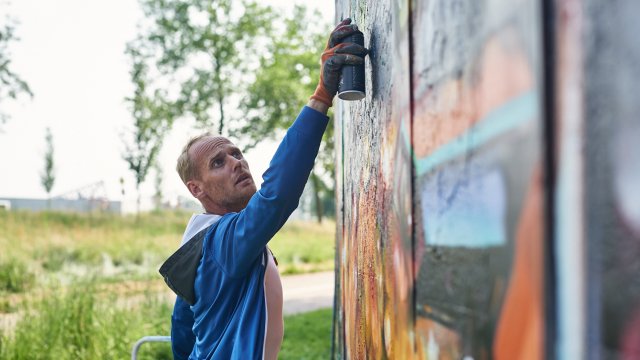 On June 8 and 9, 2019, the international graffiti festival Step In The Arena will celebrate its anniversary edition.

What started in 2010 as a festival where talent and renowned artists could meet each other, grew over the years into the largest graffiti festival in the world with artists from home and abroad.

More than 150 graffiti artists from all over the world come to Eindhoven and spend the entire weekend working on the creative transformation of Europe’s largest Hall of Fame: the Bear Pit.
A lot of hard work is currently being done behind the scenes to complete the line-up.  A number of names have already been released, such as Aroe (UK), Chas (NL), Zmogk (RU), Deih (ES)
and Fat Heat (HU). Especially the first name, Aroe, was high on the wish list of the organization. Aroe is therefor one of the most important names in the graffiti scene.
The special thing about this artist is that he makes everything by hand, he never uses tools such as stencils or projectors. Also, a member of the world-famous graffiti crew is MSK (Mad Society Kings) that operate from Los Angeles.

During the festival you can see all the artists at work. The range varies enormously, there are many types of graffiti and street arts on display: letters, cartoon, photo-realistic and post-modern graffiti.
So make sure you bring your camera! There are also fun activities for (young) children and you can eat and drink a snack.

Step in The Arena is part of EMOVES Urban Eindhoven and is made possible in part by City of Eindhoven, Eindhoven365, Lumens, 040 Projects, Montana, Boels, The Paint Champion, Vincent Huibers, Sticker King, Mr Serious, Blue Collar Hotel, 3BE, Decofiti, and Art Pure.

Tags // Graffiti // Step in the Arena