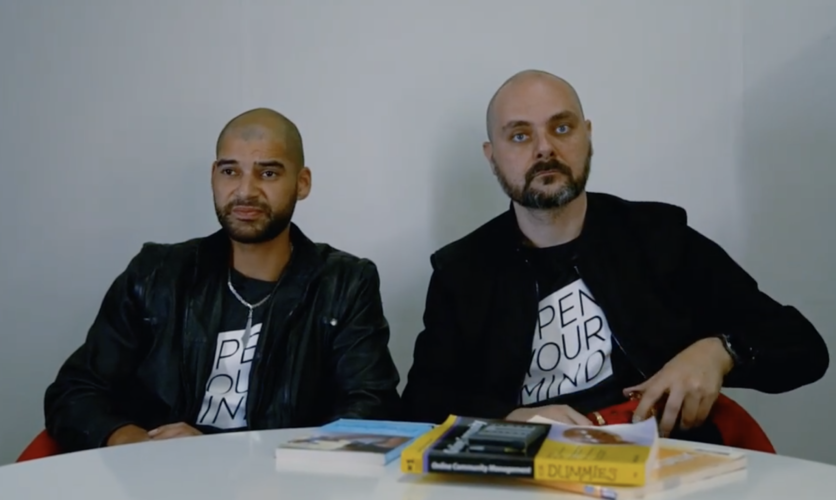 
Drosha about Open Your Mind: “Here creativity is much more important than technique”

Over the past seven years, many editions of the Open Your Mind festival have taken place, in London, Osaka, St. Petersburg and Eindhoven, among others. The 2020 online edition will kick off this weekend. The festival’s artistic director, Andrey ‘Drosha’ Grekhov, takes you into the thought behind it.

Due to the pandemic, this edition looks different than in previous years, but because of the innovative nature of Open Your Mind, Drosha sees opportunities in this: “Last year we switched to a world championship. That means that the preliminary rounds in all other countries and that the winners come to Eindhoven for the Grand Prix. I think the World Championship is a boring title because Open Your Mind is more theater than battle.”

It has since grown into an experimental dance festival, but Open Your Mind started as a personal challenge for Drosha as a creator of hiphop theater: “I concluded that most people don’t make hiphop theater. Hiphop and theater can co-exist, but they are not the same. How can you bring it as close together as possible? You had scripted jams, in which the audience was drawn away and experienced a kind of jam in the theater, I thought theater came very close to the culture. So how can cultural dance values ​​such as clubbing and getting together transferred to sitting in a chair and looking at a black box?”

That thought led to an experiment: “During the first edition, I wondered why we didn’t mix the theatrical process with a battle. Imagine: you have two dancers battle against each other. One of theme wins, done. But we can also say: the whole space is free of gravity. It turned out to be a bizarre experience enhancer for everyone. For the dancers, because they had an extra challenge. For the audience, because they don’t just see two people dance against each other. They also see that the theatrical is always a bit narrative.”

“In seven years,” Andrey continues, “Open Your Mind has grown from a cafe with 50 people where I read assignments from a piece of paper, to an increasingly interactive event. Even so far that the final round is no longer an assignment, but it becomes a real theater piece. We change the whole stage. We once transformed the whole cafe into a stage with fellow actors, we set up ramps, created a block area that grew with time, people put more and more blocks on which you could dance. We have rounds in which there is interaction with the audience, who answers a question and that was inspired by De Lama’s. We have perfected this over the years, from dance battles to a form of immersive theater.”

That form caught on: “Apparently it was enough to interest other countries to build a whole community around the event. It consists of a very diverse audience. People who do theater were suddenly interested in battling. People who often felt passed over because they are too weird in our scene, they felt at home enough to battle. We have become a place for the freaks and I am happy about that. Here creativity is much more important than technique, although of course those who win have all of that.”

Another feat that Drosha proudly mentions: “We have as many female as male winners, while we do not separate it. Something very human happens in the platform, because it is sensitive. Breaking should always bring a certain energy, popping is about moving like a robot; those are styles that are very basic, foundation, and technique oriented. Open Your Mind is the opposite. If you are an actor, or a circus person, you do it. It’s much more theater and interpretation. I stimulate the jury always looking for exceptions to the rules, so that the innovative character continues to live.”

Drosha’s mission of mixing hiphop and theater is still at its core. But Open Your Mind is broader: “In recent years we have expanded it with a choreography competition, with a videography competition, with artists in residence; I demanded innovation in every aspect. If we make aftermovies, they have to be different. That really took off, we had the most bizarre experiments. In Dynamo we had the most bizarre battles; art and battle were indistinguishable from each other. Every year I work with a young organization team and I challenge them to make Open Your Mind, which has already been established , even more innovative. Thus came the immersive battle: a team set up five different rooms in Dynamo. The first round took place in the hall. Then the whole audience walks along to the concert hall, where round two took place. Rounds on the stairs. Someone has thought of being allowed to do one move as a preselection. The entire battle consisted of one move. That means that literally everyone can participate. What kind of crazy move you can do produce? The jury member was a grandfather plucked from the street. The thought was: what would it be like if you stripped dance completely of the knowledge that lies behind it?”

That same breadth is the starting point for the online edition: “We can’t just come up with the shit everyone does. We found the answer, as often, in cheating. You can cheat in all kinds of ways. If you get into a spoken word break battle. They will say that you are on the wrong platform. In an Open Your Mind battle that is just possible. It could just be that, based on the challenge, it fits in. I welcome it, that stimulates innovation Because maybe you do that while you’re doing a pirouette.”

Machete and Drosha will soon announce the assignments for the online edition by means of sketches: “I cannot reveal these yet, but imagine: the assignment for the first round is ‘solo on the toilet’. You get one minute. Everyone can submit a solo on the toilet and the judges make a choice. When we started discussing the rules it was suggested that they are only allowed alone and that they are not allowed to edit. And I thought: wait a minute. Why? Do it! If you want to make a toilet like a sardine can, do that. And then if you make an edit in which you talk, do that. That’s much more the spirit of innovation and art than those rules. Our goal is to have super cool movies. You want people to look at it on Instagram and feel amazed and inspired.”